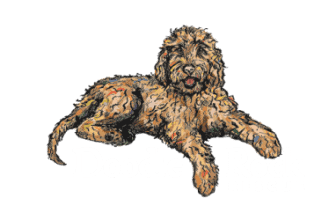 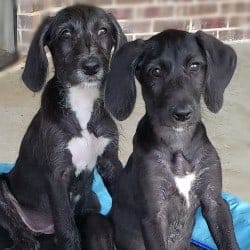 Bailey & Britt is searching for a forever home! 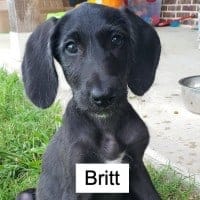 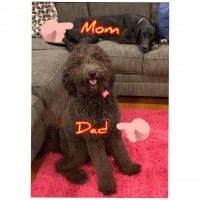 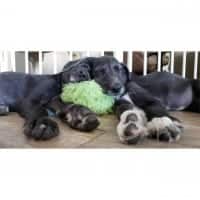 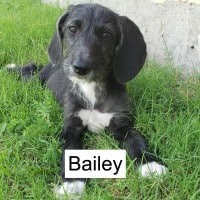 These adorable ladies are ready for their debut! Bailey and Britt were born April 20th, and are the sweetest Danedoodles you'll ever meet! Mom is a Great Dane, and dad a Standard Poodle, so they will be giant teddy bears. They're up to date on their vaccinations, low- shedding, and love all kids and every dog they've met. And even though they give the sweetest and gentlest kisses, small children might not be a great idea- simply because of their size. They're learning not to jump up, how to use a leash, and are both doing great on house-training! They do great in the crate at night and while I'm out. They're still puppies, so someone at home to help them continue to learn this, and what's appropriate to chew, is important. I haven't seen them around cats, but we have some large toads they've chased and played gently with??.

Bailey is the larger of the sisters, weighing in at almost 16 lbs now, and has the cutest white paws and white on her chest. She is a loveable, clumsy goofball, who will likely grow up thinking she's a lapdog ?. Her favorite place to be is near you or her sister, so she would love to have a constant companion. She loves belly rubs, and is quick to flop over and show her darling tummy. Her favorite toys either crinkle or make excellent tug'o'war ropes. She has never destroyed a toy, but will see anything as one ?. Bailey loves to play hard, nap harder, and love much! She just has the greatest personality, and will make such a wonderful pet and companion!

Britt is a bit smaller than her sister at about 15 pounds, and has less white. She is an absolute darling! She's a great mix of loving snuggles and playfulness. She enjoys company, and will also enjoy sitting by herself with a good chewy. Britt adores my large dog, and can often be found following her and trying to engage her in play. She would also love having a canine companion, along with her human family. One of our favorite things about Britt is when she hides and waits patiently for her sister to come along, then tackles her! Britt is half dainty princess and half tomboy ?. She's soft and gentle with new friends, but once she gets to know you, she'll expect some good fun!

I simply can't say enough good things about these girls! They will fill your home (and couches if you let them!?) with love and joy!

Bailey & Britt has received age appropriate shots and microchip. HW-. Sterilization to be completed at 6 months and covered by DRR